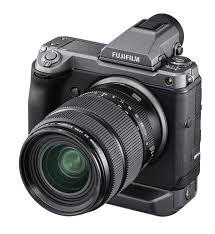 Now the company has announced a late June release for its new 102 megapixel medium format flagship, the GFX100.

Inside there's a new 43.8 x 32.9 mm BSI CMOS image sensor with 102 million effective pixels, which Fujifilm promises will "deliver image clarity and capability previously unheard of in the photography and video industries." This is paired with the company's X-Processor 4 processing engine for a 0.4 second startup time, ISO100 to 12,800 standard light sensitivity range (which can be extended up to ISO102,400), and up to 5 frames per second continuous shooting in JPEG format (14 in RAW).

Responding to requests from professional photographers, Fujifilm has included the ability to save photos in 16-bit RAW and 16-bit TIFF formats. There's Intelligent Hybrid AF with contrast and phase detection, and the GFX100 includes 5-axis in-body (sensor shift) image stabilization with up to 5.5 stops of compensation, with Fujifilm saying that the entire shutter unit has been mounted on four springs to help reduce shutter shock.