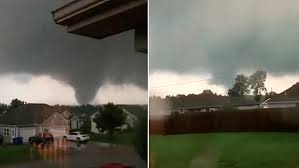 A catastrophic tornado has ripped through Missouri's capital, according to the National Weather Service.

The 'violent tornado' was confirmed in Jefferson City around 11.43pm Wednesday night. Jefferson City took a direct hit by the storm and there are several unconfirmed reports of residents hearing 'mass casualties' over their scanners.

Three deaths in Missouri have been confirmed, the result of a tornado earlier in the day, but there is no word yet on possible fatalities in the capital.

Police Lt. David Williams said officers have received multiple calls of people being trapped in their homes and 20 people have been rescued by emergency workers in Jefferson City.

An emergency alert described the tornado as 'large and destructive' and moving at 40mph. The NWS of Saint Louis said on Facebook that the tornado has 'produced extensive damage'.

Some residents are also trapped under rubble in the Hawthorne Apartment complex that suffered damage to more than half of its building.

Firefighters have begun rescue operations in the area, including at the apartment building. Missouri Task Force 1 was also activated.

The decimation of Lake Oroville: