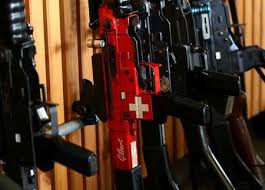 The vote was part of Switzerland's regular referendums that give citizens a direct say in policymaking.

It had stoked passions in a country with long, proud traditions of gun ownership and sport and target shooting.

Switzerland, unlike many other European nations, allows veterans of its obligatory military service for men to take home their service weapons after tours of duty.

The Swiss proposal, among other things, requires regular training on the use of firearms, special waivers to own some semi-automatic weapons and serial number tracking system for key parts of some guns.

Gun owners would have to register any weapons not already registered within three years, and keep a registry of their gun collections.

Supporters of the measure, who included the Swiss parliament and executive branch, said similar measures adopted by the EU after deadly extremist attacks are needed to ensure strong police cooperation and economic ties with Switzerland's partners in Europe's Schengen visa-free travel zone.