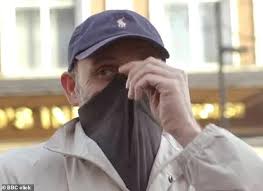 Officers set up the camera on a van in Romford, East London, which then cross-checked photos of faces of passers-by against a database of wanted criminals.

But one man was unimpressed about being filmed and covered his face with his hat and jacket, before being stopped by officers who took his picture anyway.

After being pulled aside, the man told police: 'If I want to cover me face, I'll cover me face. Don't push me over when I'm walking down the street.'

It comes just weeks after it was claimed the new technology incorrectly identified members of the public in 96 per cent of matches made between 2016 and 2018.

he cameras have been rolled out in a trial in parts of Britain, with the Met making its first arrest last December when shoppers in London's West End were scanned.

But their use has sparked a privacy debate, with civil liberties group Big Brother Watch branding the move a 'breach of fundamental rights to privacy and freedom of assembly'. Police argue they are necessary to crack down on spiralling crime.