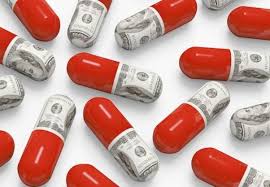 Alexandria Ocasio-Cortez led a grilling of a pharmaceutical CEO over the $2,000 price tag on an HIV-prevention drug which costs less than $10 in other markets.

Experts say that the US could end HIV transmissions by 2030 if 1million more Americans were taking the drug, known colloquially as PrEP (pre-exposure prophylaxis).

But the price has made it inaccessible to many, leading to thousands more HIV diagnoses in the past four years alone - as Gilead rakes in $3 billion a year in revenue.

At a committee hearing on Thursday, Rep Ocasio-Cortez demanded Gilead CEO Daniel O'Day to explain why they would not lower the price.

'There's no reason this should be $2,000 a month. People are dying because of it and there's no enforceable reason for it,' Ocasio-Cortez said.

O'Day responded that Truvada is patent-protected in the US, unlike in the rest of the world.