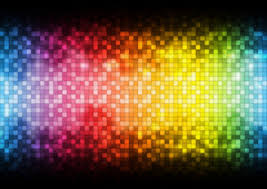 These new pixels could be used in huge, flexible displays that are relatively easy to manufacture and cheaper to run.

Each new pixel starts with a grain of gold, just a few nanometers wide. These are coated in an active polymer called polyaniline, and then placed onto a reflective surface that traps particles of light under each pixel. The idea is that when the polymer is electrically switched, it chemically changes, which in turn changes the color of the pixel.

These pixels can be made fairly easily and cheaply, too. The gold can be coated in polymer by the vat, and then sprayed onto a flexible surface of just about any size. They're bright enough to be seen in sunlight, and interestingly, once a pixel is switched to a certain color, it holds that color until it's instructed to switch again. That makes them potentially very energy efficient – if a still image is frozen on the screen, for example, it's not using any energy.

"The strange physics of light on the nanoscale allows it to be switched, even if less than a tenth of the film is coated with our active pixels," says Jeremy Baumberg, lead researcher on the study. "That's because the apparent size of each pixel for light is many times larger than their physical area when using these resonant gold architectures."