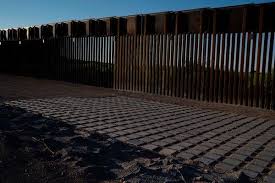 Shanahan then added "I won't be reprogramming any more money for the border wall."

In March, CNN reported that the Pentagon had authorized $1 billion to begin construction on 57 miles of border fencing, which would be diverted from the DoD's $2.5 billion drug-interdiction program authorized via Trump emergency order which reappropriated some $7 billion from various sources to build the wall.

The 56-year-old Shanahan has been acting secretary since James Mattis's December resignation. Since taking over at the DoD, he has backed President Trump on several policy decisions, including Trump's surprise announcement that the US would withdraw from Syria, as well as Trump's deployment of US forces and other measures to stem the flow of illegal migration at the southern border.

Graham and other lawmakers later confronted Shanahan in Munich this year over Trump's plans to withdraw troops from Syria, which the South Carolina senator reportedly slammed as "the dumbest f—ing idea I've ever heard."

Shanahan was also chastised by Senate Democrats who accused him of withholding details on what military construction programs could be deferred to fund Trump's border wall under the national emergency. –Politico