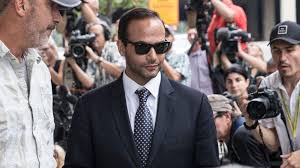 During the show, Toensing, an attorney who partners with her husband at the Washington DC law firm diGenova & Toensing, accused the FBI of trying to frame Papadopoulos with a suitcase full of cash in the summer of 2017.

According to Toensing, Papa-D was vacationing with his then-fiance, Simona Mangiante, in Greece when he was approached by someone who was supposedly impressed with his credentials, and said he wanted to do business with him. The individual allegedly talked the then-29-year-old into traveling to Israel to make a deal, and invited him to his hotel room.

"And there on the bed, is $10,000 in cash in a suitcase," she continued. Papadopoulos took the money and gave it to his lawyer, who has it still.

Toensing said when Papadopoulos returned to the United States, he was greeted by FBI agents at Dulles Airport and they started searching through everything that he had "the second he landed."

"It was a set up!" exclaimed Gorka.

"It was a complete set up," agreed Toensing.