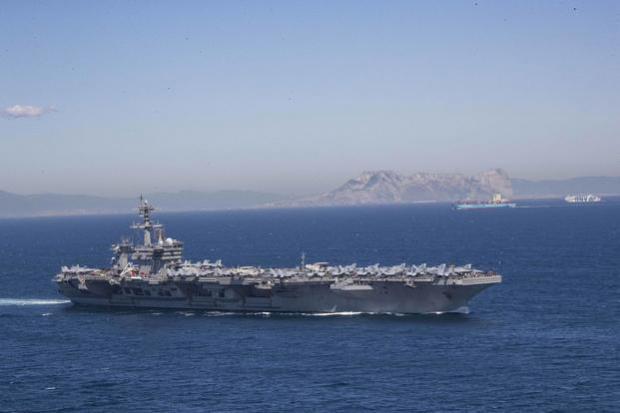 At a moment the US carrier strike group ordered deployed to the CENTOM Persian Gulf region area of command has traversed the Suez Canal, and as multiple B-52 bombers have also landed in Qatar in response to "troubling and escalatory" threats by Iran against US troops in the region, a top American military commander in the region has threatened he's ready to send an aircraft carrier through the vital Strait of Hormuz "if needed".

But should the US send a carrier through the key narrow oil shipping Persian Gulf choke point which is routinely patrolled by IRGC boats, one senior cleric has vowed the US Navy's...

Vice Admiral Jim Malloy, commander of the US Navy's Bahrain-based Fifth Fleet, made the statements to Reuters on Friday.

He oversees all US naval forces in the Middle East, and at the very moment the USS Abraham Lincoln Nimitz-class carrier makes its way into the area, the commander said, "If I need to bring it inside the strait, I will do so." He added, "I'm not restricted in any way, I'm not challenged in any way, to operate her anywhere in the Middle East."

He didn't specifically name the USS Abraham Lincoln during the telephone interview, but certainly the remarks were intentionally timed as a part of the White House's ongoing "maximum pressure" campaign against Iran.

Iran, for its part, has dismissed the "deployment" and the underlying threat Bolton touted Sunday night as requiring a response as "fake intelligence" and part of a US "psychological warfare" campaign - further noting the carrier strike group's embarkation was pre-scheduled and merely used as a pretext for escalating threats.

Of the latest claims that credible intelligence indicates Iranian actions against Americans in the region could be imminent, Malloy said the intelligence was linked "with actual activity that we observed."

"And that was certainly enough for me... to say that we saw this as a threat," he said. Addressing the question of Iranian ICBM's and recent statements of intelligence officials saying they'd observed Iran transferring missiles on boats, the top admiral said further, "It might be a new fielding of technology by Iran," Malloy said, adding the weaponry "falls under the category of destabilizing and offensive in nature."

Meanwhile, on Tuesday US defense officials indicated a number of B-52 bombers would be part of "additional forces" sent to the region in response to the new intelligence demanding heightened readiness against Iran.