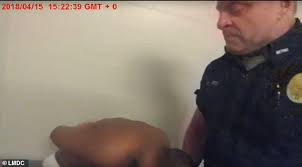 Two former Kentucky correctional officers have been charged with beating a handcuffed prisoner after shocking video showed them punching a 19-year-old inmate in the face.

David M. Schwartz, 48, and Devan Edwards, were indicted Wednesday over the attack on Terry Whitehead at the Louisville Metro Department of Corrections in April 2018.

Their supervisor Donna Gentry, 55, was indicted with obstruction of justice for allegedly trying to cover up the assault.

The officers can be heard saying loudly that Whitehead was spitting and 'being combative' when he put his legs up to keep them at bay.

'This ain't right, right here,' Whitehead repeatedly states in the footage after he is socked in the eye.

Court documents state Edwards punched Whitehead twice in the face while he was seated, handcuffed and not resisting. He also failed to stop Schwartz from assaulting the man.