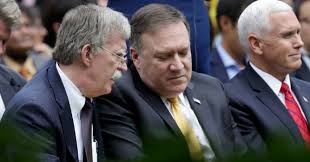 On Sunday, May 5, U.S. National Security Adviser John Bolton announced that the USS Abraham Lincoln Carrier Strike Group and a bomber task force had begun to make their way from the Mediterranean Sea toward the coastline of Iran. Iran, Bolton said, had made "a number of troubling and escalatory indications and warnings." He was, characteristically, not specific. It was enough that Bolton—who has a history of making hazardous statements—had made these comments from the perch of the White House in Washington, D.C. "The United States is not seeking war with the Iranian regime," he said rather incredulously. After all, what is the arrival of a massive war fleet on the coastline of a country but a declaration of war?

On his way to Europe, U.S. Secretary of State Mike Pompeo said that the "indications and warnings" included actions by the Lebanese political formation Hezbollah. Once more, Pompeo said he would give no evidence. "I don't want to talk about what underlays it."

The journey of the USS Abraham Lincoln through the Red Sea comes as the U.S. government tries to tighten its sanctions regime against Iran. Any country that buys Iranian oil, the United States now says, will be liable to have sanctions placed against it.