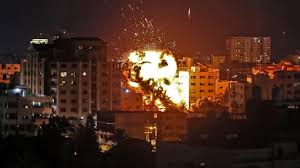 One of the terror groups attacking Israel has admitted that its own rocket killed a 14 month old baby in Gaza, exploding inside the family's home.

A report from the Telegram account of Hamas' al-Risala News was published Sunday and said that the 14-month child was killed by a Gazan rocket that exploded inside of the family's home, there are also reports that a woman also died in the Saturday blast. The report was quickly deleted, the Jerusalem Post reports.

"There is a claim that the technical failure was caused by low-grade explosives in the rocket," it said. "There is no doubt that the baby's death has nothing to do with the enemy's [Israel's] planes."

Hamas blamed Israel for the killing, which the IDF denied in a tweet, writing, "Yesterday, Palestinian weapons caused the tragic death of a mother in Gaza and her baby. Hamas blamed Israel. Journalists amplified the lie. Our assessment indicates that the incident had nothing to do with IDF strikes."