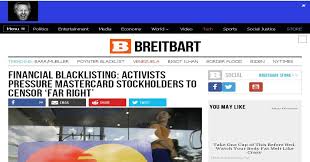 The Board of MasterCard has opposed the proposal, stating that consumers should be able to make all lawful purchases, and urged stockholders to vote against it.

Left-wing activists have forced MasterCard to hold a shareholder vote on the creation of a "human rights committee" that would monitor payments to the "far right," with a view to cut off disfavored individuals and political groups from receiving money from supporters.

BuzzFeed reports that the proposed Mastercard human rights committee would "stop designated white supremacist groups and anti-Islam activists, such as Tommy Robinson, from getting access to money sent from donors using the company's card payment services."

The Board of Mastercard has opposed the proposal, urging stockholders to vote against it.

The proposal was submitted for a vote at Mastercard's upcoming meeting of stockholders on June 25, 2019. The proposal was submitted by left-wing advocacy organization ThisIsUs, whose board members are linked to Color of Change, a group that has been pressuring banks, payment processors, and credit card companies to cut off service to right-wingers, Islam critics, and critics of progressivism.