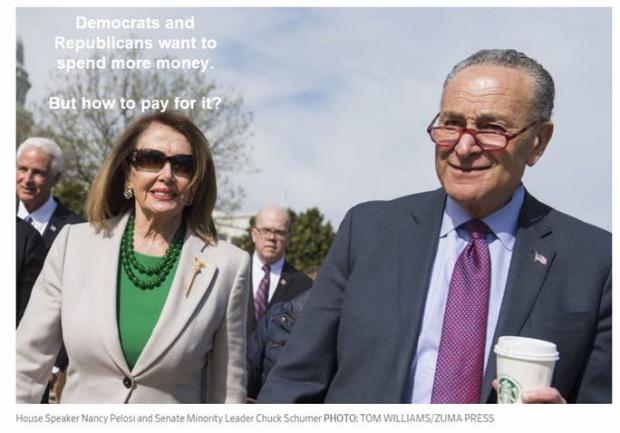 Republicans and Democrats alike like to spend money. As is typically the case, the only disagreement is how to pay for it.

Democratic congressional leaders said President Trump agreed to aim for a $2 trillion infrastructure package in a White House meeting on Tuesday, though it remains unclear how they will seek to pay for it.

In unusually positive comments about negotiations with the president, House Speaker Nancy Pelosi (D., Calif.) and Senate Minority Leader Chuck Schumer (D., N.Y.) both praised the meeting as productive and said they had agreed to return in three weeks to hear Mr. Trump's ideas about how to pay for an infrastructure bill.

Democrats disagree internally on how to generate revenue for an infrastructure plan. Mr. Schumer won't consider a proposal to raise the gas tax, unless Mr. Trump agrees to undo some of the 2017 tax cuts, a person close to the minority leader said. Mr. Schumer, along with several other Democrats, say a gas tax disproportionately hurts poor and working-class people.