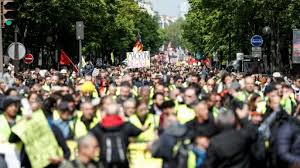 The Paris march, organised by the militant CGT union, came ahead of the main yellow vest march in the eastern city of Strasbourg, where protesters clashed with police trying to enforce a ban in parts of the city centre.

Veterans of the protests, which have been running for six months now, led off the Paris march.

But in a new development, many senior figures from the radical left marched with them, including Jean-Luc Melenchon, the leader of France Unbowed and one of Macron's most vocal critics.

Welcoming this show of political unity, Melenchon told BFM TV: "It's the first time that there has been a call of this kind, that's to say union organisations, associations and political movements."

That in itself made it a political event, he added.

It was a government plan to increase diesel prices and raise taxes on pensions last November that sparked the protests in rural France, which quickly ballooned into a full-scale anti-government rebellion.