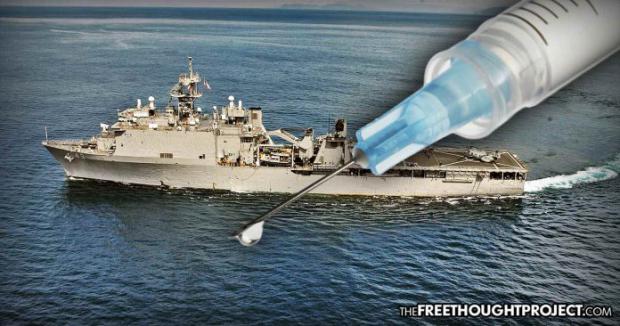 A US Navy ship has been quarantined at sea for months due to a mumps outbreak. This is in spite of a 100% percent vaccination rate against it.

The USS Fort McHenry, a dock landing ship, has been stuck at sea for months, along with hundreds of Marines and sailors aboard after dozens of crew members contracted mumps. The ship remains quarantined as officials with the Navy and Marines Corps Public Health Center conduct an in-depth epidemiological investigation.

The cases began to surface in December after the ship departed Mayport Naval Station in Florida. Although that was the last time at port, "the point of origin has not yet been determined," the Fifth Fleet noted.

The Navy's Bureau of Medicine and Surgery (BUMED) explained to Business Insider that "based on clinical presentation and laboratory testing, these cases are currently classified as probable cases of mumps," one of a number of illnesses that all US military personnel are vaccinated against.

Every single person aboard the USS Fort McHenry has been vaccinated against this virus, yet dozens have been infected. Even after more booster vaccines were administered, more cases of the vaccine-preventable virus appeared.

"Since the onset of the first case, the ship's medical department has implemented health protection measures, provided an additional outbreak-specific dose of vaccine to the crew, and managed patients to stop the spread of the illness," BUMED explained.

REPORT: The U.S. Navy can no longer defend America because it's too focused on being "woke&

Preparing for War in the Atlantic, NATO Opens New Command in Virginia

Mayor of Miami on Bombing Cuba: 'That Option Is One That Has To Be Explored'

Just What Is The Hidden Agenda Behind U.S. Military Order For Anti-Aging Pills?

STRAPPED INTO A SINKING HELICOPTER (with U.S. Marines) - Smarter Every Day 201

UNVACCINATED SOLDIERS WILL BE FIRED --