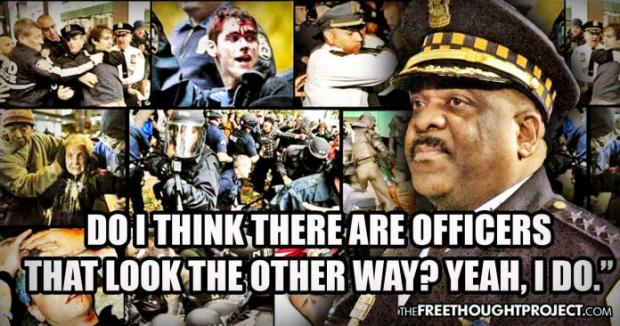 Chicago, IL — Recently, Chicago's top cop, Police Supt. Eddie Johnson—whose base salary is over a quarter of a million annually—told the Chicago Sun Times in an interview that cops "look the other way" all the time when it comes to witnessing misconduct within their ranks. While readers of the Free Thought Project likely know about this blue code of silence within departments, for the superintendent of one of the nation's largest police forces to come out and admit this is noteworthy and utterly astonishing.

The system of US law enforcement is set up to protect itself which makes it nearly impossible for an individual whistleblower to prove wrongdoing. In case after case, TFTP reports incidents in which abuse, violence, and even murder has gone on inside police departments, is widely known inside the department, yet no one speaks up. Chicago is one of the worst departments in this regard.

Crossing the blue line often means career suicide and can also be dangerous. Previously, the Free Thought Project reported on the whistleblowers from the Chicago police department whose very lives were threatened for trying to expose the corruption in their department.

As Shannon Spalding, one of the whistleblowers from the CPD points out, this blue code of silence and punishment is already an unfortunate reality for most and the superintendent's comments back her up.

"It's no secret that if you go against the code of silence, and you report corruption, it will ruin your career," Spalding said.

Spalding and her partner Daniel Echeverria uncovered a massive level of corruption in their department, leading to the arrest of other officers. However, being good cops got them threatened with "going home in a casket."

This cycle of the "blue line" of protection can only persist for so long before there is no one left with enough courage to call out the corruption.

Illinois has a win over Facebook in $350 million lawsuit

An Exceptionally Sad Day For Illinois

This Is How A State Goes Bankrupt, Illinois Edition