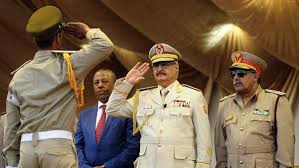 In a sharp reversal of longstanding US policy which recognizes only the UN-backed Government of National Accord (GNA) in Tripoli as the legitimate authority over Libya, the White House on Friday said President Trump spoke by phone this week to Benghazi based commander Kalifa Haftar, pledging support to the general and his Libyan National Army (LNA) as it lays siege to the capital.

The call took place on Monday, but was only revealed at the end of this week amid ongoing fighting in and around Tripoli, under assault for the past two weeks by Haftar's forces, which early this month led to the withdrawal of a contingency of US Marines, citing the deteriorating security situation.

The White House readout said the two discussed "ongoing counterterrorism efforts and the need to achieve peace and stability in Libya."

Interestingly in early April Secretary of State Mike Pompeo had urged in a statement for Haftar to halt his advance: "We have made clear that we oppose the military offensive by Khalifa Haftar's forces and urge the immediate halt to these military operations against the Libyan capital," Pompeo said at the time.