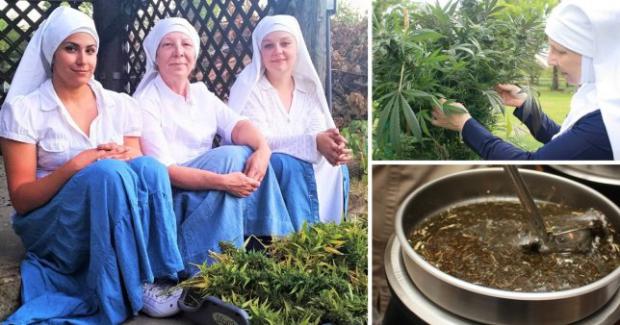 A documentary will be released on Saturday to mark the weed users' holiday of 4/20.

Sister Kate Meeusen started the Sisters of the Valley in 2011 with just twelve plants.

But now it's an international operation that helps treat people with health or addiction problems.

The 'Breaking Habits' film, directed by British filmmaker Rob Ryan, explores the history and sustained survival of the weed-growing nuns.

'I've seen the film so many times I'm sick of it, I didn't like it but everyone else likes it so I'm happy about that,' said Sister Kate, 60, who resides in Merced County, California with her community of sisters.

The film explores how Sister Kate and her team have fought bitterly against 'white man rule' including the obstructionist country sheriff and black market thieves.

'We don't like the white man rule,' said Sister Kate, who makes and sells CBD products such as salves and oils with her sisterhood.

'Farm people are very slow to adapt to new ideas, people are stuck in the 1950s with their ideas towards the cannabis plant for medicinal use.'

So far Sister Kate has attempted to cure eight people of addictions using her CBD products, and she says they have all recovered.