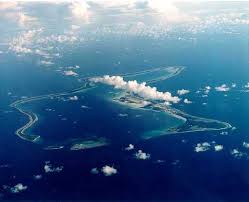 For a tiny speck of land measuring only 38 miles in length, Diego Garcia casts a long shadow. Sometimes called Washington's "unsinkable aircraft carrier," planes and warships based on the island played an essential role in the first and second Gulf wars, the invasion of Afghanistan, and the war in Libya. Its strategic location between Africa and Indonesia and 1,000 miles south of India gives the U.S. access to the Middle East, Central and South Asia, and the vast Indian Ocean. No oil tanker, no warship, no aircraft can move without its knowledge.

Most Americans have never heard of Diego Garcia for a good reason: No journalist has been allowed there for more than 30 years, and the Pentagon keeps the base wrapped in a cocoon of national security. Indeed, the UK leased the base to the Americans in 1966 without informing either the British Parliament or the U.S. Congress.

The February 25 Court decision has put a dent in all that by deciding that Great Britain violated United Nations Resolution 1514 prohibiting the division of colonies before independence. The UK broke the Chagos Islands off from Mauritius, a former colony on the southeast coast of Africa that Britain decolonized in 1968. At the time, Mauritius objected, reluctantly agreeing only after Britain threatened to withdraw its offer of independence.