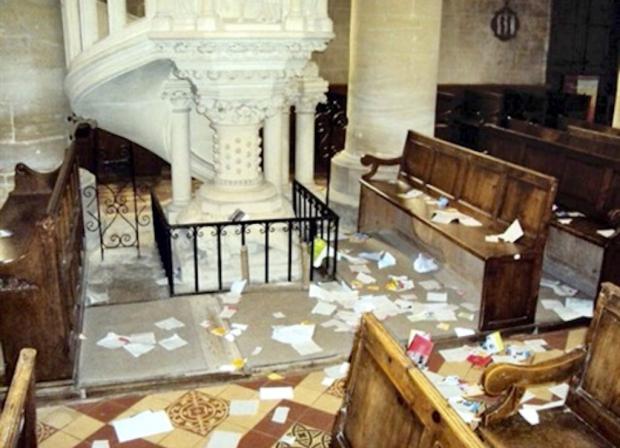 In Response To: Breaking: 800 YO Paris Notre Dame Cathedral in Flames (Watchman)

According to the heritage official responsible for the basilica, Saadia Tamelikecht, the vandal must have found himself "stuck inside the enormous organ" and "damaged the motor and broken the doors on the casing" to escape. Traces of blood were also found among the shards of stained-glass. In addition to the damage to the instrument and the stained-glass windows by which the intruder(s) entered, two other stained-glass windows were smashed and two locks forced.

The broken stained-glass windows dated from the 19th century. They were among the pieces reworked by the architects who restored the basilica after the destruction of the French Revolution, François Debret (1777 – 1850) and Eugène Emmanuel Viollet le Duc (1814 – 1879). The investigation is in the hands of the commissariat of Saint-Denis.

The basilica is the first Gothic church in Europe built in 1135.

The over 800-year-old Basilica of Saint-Denis in France was heavily vandalised this week, with vandals smashing stained glass windows and severely damaging the nearly 200-year-old organ.

The destruction was discovered on Sunday morning by the basilica's organist, who found that the engine of the organ had been damaged along with other parts of the massive instrument, designed between 1834 and 1841, Le Parisien reports.

Saadia Tamelikecht, head of the departmental unit of architecture and heritage of the heavily migrant-populated Seine-Saint-Denis suburbs, said the damage to the instrument, which has been recognised as a historic monument of significance in France, was major.The vandalism was likely done, according to Tamelikecht, as a result of someone hiding within the instrument and smashing their way out.On Tuesday, even more damage was discovered, with two stained glass windows having been smashed along with two locks that had been pried open. The windows were created in the 19th century, rebuilt after the destruction of the French revolution. Police say they are investigating the incidents.

The vandalism comes just under a year after the Basilica was stormed by far-left activists and illegal migrants who occupied the place of worship to protest a law directed at curbing illegal migration into France.

On February 9, a malefactor broke a sacred vessel and spread hosts across the altar of the church of Notre-Dame in Dijon. The sacristan called the police. A Mass of reparation was celebrated that same afternoon by Bishop Roland Minnerath.