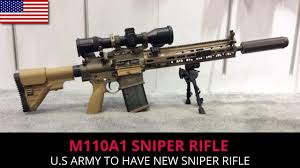 Earlier that year, the Army announced the M110A1 would be first tested then fielded with infantry squads.

According to the National Interest, the Army alleges the new sniper rifles "increased accuracy, plus other ergonomic features like reduced weight and operations with or without a suppressor."