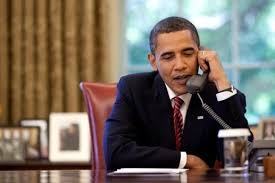 On Tuesday Night Charles Krauthammer dropped another Benghazi bombshell on The O'Reilly Factor. He claims that the President's phone call to Hillary Clinton was made so that they could develop their "cover story" shortly before she released this statement at approximately 10 PM:

I condemn in the strongest terms the attack on our mission in Benghazi today. As we work to secure our personnel and facilities we have confirmed that one of our State Department officers was killed. We are heartbroken by this terrible loss. Our thoughts and prayers are with his family and those who have suffered in this attack.

Some have sought to justify this vicious behavior as a response to inflammatory material posted on the Internet. The United States deplores any intentional effort to denigrate the religious beliefs of others. Our commitment to religious tolerance goes back to the very beginning of our nation. But let me be clear: There is never any justification for violent acts of this kind.

In light of the events of today, the United States government is working with partner countries around the world to protect our personnel, our missions, and American citizens worldwide.

China is stealing your DNA with home ancestry kits