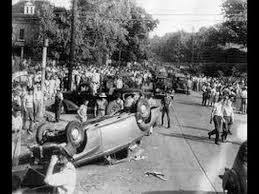 In 1936 the E. H. Crump political machine based in Memphis, which controlled much of Tennessee, extended to McMinn County with the introduction of Paul Cantrell as the Democratic candidate for sheriff.[1] Cantrell, who came from a family of money and influence in nearby Etowah, tied his campaign closely to the popularity of the Roosevelt administration and rode FDR's coattails to victory over his Republican opponent in what came to be known as "vote grab of 1936" which delivered McMinn County to Tennessee's Crump Machine.[1] Paul Cantrell was elected sheriff in the 1936, 1938, and 1940 elections, and was elected to the state senate in 1942 and 1944, while his former deputy, Pat Mansfield, a transplanted Georgian, was elected sheriff.[1] A state law enacted in 1941 reduced local political opposition to Crump's officials by reducing the number of voting precincts from 23 to 12 and reducing the number of justices of the peace from fourteen to seven (including four "Cantrell men").[2] The sheriff and his deputies were paid under a fee system whereby they received money for every person they booked, incarcerated, and released; the more arrests, the more money they made.[2] Because of this fee system, there was extensive "fee grabbing" from tourists and travelers.[3] Buses passing through the county were often pulled over and the passengers were randomly ticketed for drunkenness, whether guilty or not.[2] Between 1936 and 1946, these fees amounted to almost $300,000.[3]