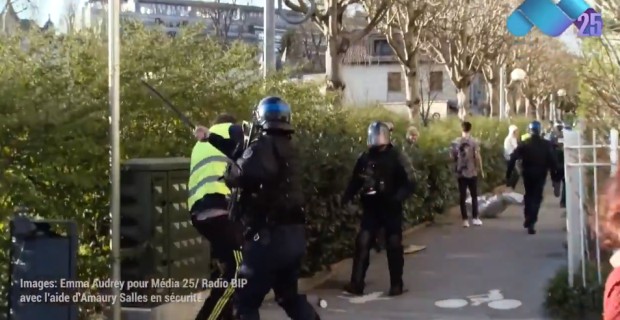 Despite media attention waning, police brutality against Yellow Vest protesters in France shows no sign of slowing, with two new videos depicting unprovoked violence that wouldn't look out of place in a dictatorship.

In the first clip, shot in Toulouse, a police officer runs out of his vehicle before violently grabbing a man doing nothing other than washing his face. Another officer then whacks him over the head with a baton.

Reinforcements then arrive and threaten people filming the incident while the man is being arrested and dragged away.

"The man was washing his face in the water and they start hitting him with sticks – why?" asks one woman.

A second clip out of Besançon shows a riot cop run up to a man wearing a yellow vest and smack him in the head with his baton. The violence is particularly egregious because the man is not even being detained or arrested.

The man is then seen profusely bleeding from his head as fellow protesters urgently call for a medic. Police then spray the entire area with tear gas.

Experts say that President Macron's decision to meet the protests with increasing authoritarianism could backfire horrendously.