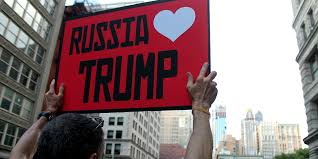 12-D chess master Putin then used that mind-controlled puppet to increase sanctions on Russia, expel dozens of Russian diplomats, sell arms to Ukraine, withdraw from the INF treaty, build up NATO troops on the Russian border, stage a coup in Venezuela, and generally make life worse for Russia as part of his grand scheme to enable the rise of a new Russian Empire.

Luckily, the valiant US media was all over the case.

The intelligence agencies knew what to do.

And Saint Mueller was on the job commanding an army of 40 agents, 2,800 subpoenas, 500 search warrants, 500 witnesses 230 communication records and a partridge in a pear tree, so we all knew that the walls are closing in.

1 Comments in Response to Russiagate: A Conspiracy Theory

BRAD PARSCALE It is amazing how this guy was never looked at by the investigation and everyone ignores what he was able to pull off behind the scenes. That is your real story of who and how trump was elected. Here is the rub...He used facebook in order to reach voters. He had facebook employees at his office during the campaign and done it all for less than 100 million. He used facebook tech to gather specific info on voters and send them detailed tailored ads to their accounts right up to the voting booth. The beauty of his plan is the system he used erased the ads and info linked after viewing the ad. Facebook has no records of the ads in their system. I am not claiming any thing was illegal but i am telling you that we will never know and it is very much possible the ads were the same ones that turned up in the investigation and no one was ever questioned on this matter. I hear robert loves crypto?