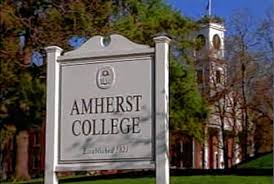 Amherst College in Massachusetts just did something so ridiculous that it actually had to reverse course, and that never happens.

The Office of Diversity & Inclusion posted and emailed to students a 36-page "Common Language Guide."

You're probably thinking: another speech code. Been there, done that.

This thing went way beyond that.

It tells students what words are to be taken to mean, and, in effect, how they are to think about them.

We learn that "capitalism" is an economic arrangement that "leads to exploitative labor practices, which affect marginalized groups disproportionately."

"White feminism" is described as being "predicated upon the erasure of women of color and the ways in which racism and sexism converge and compound one another."

"Homonationalism," a term I'll bet the quaint and old-fashioned among you have never heard before, is a concept whose purpose is "to explain the ways in which cis-gay and lesbian veterans of the Iraq War were celebrated as proof of American exceptionalism in contrast to racist/orientalist discourse about Iraqi combatants and other people in Central Asia racialized outside of U.S. understandings of whiteness."

Imagine 36 turgid pages of that.

After an outcry from the relatively small number of ideological dissidents on campus, the college president intervened to say that she had not approved the document, that it unjustly attempted to police thought, and that it was not then and would not in the future be an official college document.

The head of the Office of Diversity & Inclusion, for his part, acknowledged that "it was a mistake to send it from my office to the entire community because of the implication that the guide is meant to dictate speech and expression or ideology on campus.

"It does not represent an official position of the College or an expectation that everyone on campus should use any particular language or share a point of view."

Even though the document has surely had a chilling effect on campus speech, we should be pleased and impressed that good folks managed to win this abrupt reversal.

Should you want to acquire real knowledge in an atmosphere without intimidation or oddball word meanings, do what all smart libertarians do:

New York state will raffle off 50 FULL four-year college scholarships, including room and board...

Academia And The Tragedy of The Smart Kids

Penn State To Stop Using "Freshman", "Sophomore", Other Terms Because Of --