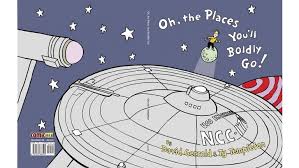 What do you find at the intersection between the quadrants of Star Trek and Dr. Seuss? Why, a fair-use lawsuit, of course! But thanks to a federal judge's ruling on Tuesday, that suit's supply of dilithium crystals might be running dangerously low.

Confused? Let's break it down. We've all heard of the 1990 Dr. Seuss (real name Theodor Geisel) book Oh, the Places You'll Go! It's an inspiring children's story often given as a gift to students graduating from high school or college.

"You have brains in your head. You have feet in your shoes. You can steer yourself any direction you choose. You're on your own. And you know what you know. And YOU are the one who'll decide where to go…" - Oh, the Places You'll Go! Dr Seuss pic.twitter.com/qtD9zbUQNB

But you might not have heard of Oh, the Places You'll Boldly Go!, a 2016 "mash-up" of Star Trek and Dr. Seuss. The book is the crowdfunded brainchild of ComicMix, a company that creates (as the name suggests) content related to comics and other works of fiction. In 2016, ComicMix's Glenn Hauman teamed up with longtime comics artist Ty Templeton and writer David Gerrold (real name David Jerrold Friedman), who wrote the renowned episode The Trouble with Tribbles for the original Star Trek series. They started a Kickstarter campaign to fund the project, eventually raising nearly $30,000, and considered Boldly to be "a parody, a mash-up, and a transformative work," according to an order issued Tuesday from Judge Janis Sammartino of the U.S. District Court for the Southern District of California.