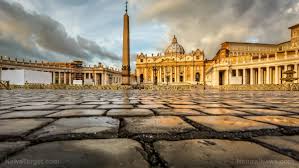 (Natural News) The Vatican now supports the use of puberty blocker drugs for kids who want to halt and suppress their natural development into a man or woman. The Vatican's new position on the issue raises red flags. Suppressing a child's hormones is a form of chemical child abuse. Those who are confused or curious about their gender should not be encouraged to destroy their innate biology.

In the spirit of moral relativism, the Vatican no longer believes objectively in right or wrong, even when it comes to human biology. The Catholic Church knows it's losing members. By loosening their moral standards they hope to attract new members. The Vatican essentially believes that Catholics should tolerate the behavior of others even when they disagree about the morality. Taking it a step further, Catholics are now told to tolerate a child's sex change using puberty-blocking drugs even if they disagree with it. As a matter of fact, Laura Palazzani, a member of the Pontifical Academy for Life and of the National Bioethics Committee recently endorsed the wide-scale funding of these drugs in the Italian National Health Services.

That's right: The Vatican's Laura Palazzani endorsed the decision of the Italian Medicines Agency (AIFA) to make the drug triptorelin (Trp) available through taxpayer funding in the National Health Services. According to Palazzani, the drug should be used "only in very circumscribed cases, with caution, with a case by case evaluation." The comments were published in the March 2nd issue of the Official Journal. Now teens with gender dysphoria can claim they want to kill themselves in order to get the drug that allows their innate biology to be suppressed. In some cases, adolescents who want to change their gender will inflict self harm if they don't get the hormone blocking drugs that are designed to make them feel more like a male or female. (Related: However you "identify" there are only two types of brains: male and female.)

1 Comments in Response to Vatican approves use of chemical castration drug in latest sign that Pope Francis...

That's not what the Vatican said at all. Check your source, bro!

Vatican running out of money due to pedophilia costs

Vatican Claims No Knowledge Of $1.8BN Quietly Transferred To Australia