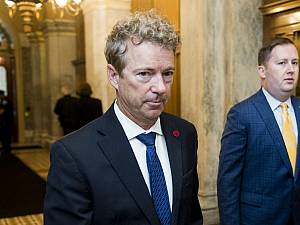 The AFGHAN Service Act would bring U.S. troops home from Afghanistan and repeal the legal justification for much of the war on terror.

Sens. Rand Paul (R–Ky.) and Tom Udall (D–N.M.) announced this morning that they'd be introducing a bill to withdraw U.S. troops from Afghanistan and repeal the legal justification that has been used for numerous other conflicts in our long-running war on terror.

"We've accomplished our mission in Afghanistan and it's time to bring our troops home," said Paul to reporters this morning. "This has been a long war. We've spent over $2 trillion total. 2,300 have lost their lives in Afghanistan, and 20,000 [have been] wounded."

"It is Congress that has failed to conduct its oversight duty of this war. We must step in and step up. We must ensure that another generation of Americans is not sent to fight a perpetual war," added Udall.

The bipartisan American Forces Going Home After Noble Service Act—or AFGHAN Service Act—would require the Secretary of Defense, within 45 days of the bill's passage, to come up with a plan to pull all U.S. military forces out of Afghanistan within a year, save for a small number of troops guarding America embassies, consulates, or supporting "intelligence operations authorized by Congress."

The bill would also repeal the 2001 Authorization for the Use of Military Force (AUMF) either within 395 days of the bill's passage, or after all U.S. troops have left the country—whichever comes first.

The 2001 AUMF was passed in the wake of the 9/11 terrorist attacks and has been pointed to as the legal justification for numerous American military interventions including not just the one in Afghanistan, but also Iraq, Syria, Somalia, the Philippines, and Niger. Repealing that legislation could hamper the White House's ability to wage a number of our current overseas interventions, says John Glaser, a foreign policy scholar at the Cato Institute.

"This could have implications for the rollback of the so-called forever war in more countries than just Afghanistan. That would be another huge benefit of this," says Glaser.

Glaser also praised the bill's tight timeline and its authors' willingness to reestablish limits on the ability of the president to fight overseas wars, telling Reason, "it's a good sign that someone is actually reasserting Congress' power over the president's war powers, and it's obviously a long time coming."