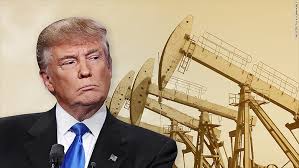 Trump's irritability with high oil prices is well-known, but the tweet suggests that he sees oil prices getting too close to dangerous political territory once again. He wants more supply to lower prices, but OPEC is much less likely to heed his warning this time around, having been burned by him last year following the surprise waivers issued on Iran sanctions, which helped crash the market.

Trump told OPEC to "relax and take it easy," and in response, Saudi oil minister Khalid al-Falih said: "We are taking it easy; 25 countries are taking a very slow and measured approach."

Al-Falih's comments suggest that OPEC will not back down in the face of pressure from the U.S. government.

The standoff is unfolding at a time when the U.S. Congress is pushing forward on the "NOPEC" legislation, which would open up OPEC members to antitrust regulation by the U.S. Justice Department. Legislation targeting OPEC has floated around Washington for years, but the momentum and odds of passage into law have never been higher. A confluence of events have come together in favor of the bill, including Democrats in the House of Representatives, an erosion of Saudi support on Capitol Hill, and a mercurial President that likes to rhetorically beat up on OPEC.

At a minimum, the possibility of the NOPEC bill becoming law grants President Trump significantly more leverage in his demands for OPEC to lower oil prices. So far, at least publicly, he has refrained from using that threat, most notably in his February 25 tweet calling on OPEC to "relax."

"The effect of President Trump's comment would likely have been greater had he explicitly mentioned the [NOPEC bill]," Standard Chartered analysts wrote in a note. The investment bank noted that the sharp fall in oil prices that day may have been a result of the market interpreting the tweet as a veiled threat to OPEC regarding the NOPEC bill. However, Standard Chartered said that may not have been the case.

"Trump has not up to now been known to specialise in veiled threats; he tends to be explicit."

So, perhaps Trump is holding his fire, at least for now. Even though Capitol Hill has warmed up to the bill, there are powerful interests lining up against the legislation, including the U.S. Chamber of Commerce, the American Petroleum Institute and much of the domestic oil industry. After all, U.S. oil producers are perfectly happy to let OPEC cut production to boost prices – OPEC's actions to engineer higher prices works entirely in the favor of U.S. shale drillers.

Also, U.S. Secretary of Energy Rick Perry expressed some skepticism on Thursday about the NOPEC bill, arguing that without OPEC's market management, prices could crash, dealing a blow to supply, which could subsequently raise prices again. Hailing from Texas, Perry is wary of letting his friends in the shale industry suffer. In short, no market management from OPEC means a lot more volatility.

Still, OPEC is not exactly popular in Washington or elsewhere in the United States, so it doesn't exactly have much of a political constituency outside of the oil industry. Bashing OPEC, or at least being seen as confronting the oil cartel, is arguably a political winner. That gives the bill decent odds of becoming law.