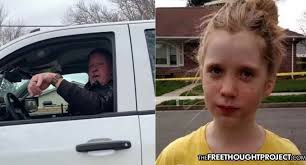 A 12-year-old girl, who runs her very own news organization, was threatened with arrest by a police officer who claimed it was illegal to film him and put it online. So she owned him by proving him wrong.

Patagonia, AZ — If you have been to the Free Thought Project before, chances are you've seen one of the countless videos we've covered showing police officers threaten to arrest people for practicing their First Amendment right to film in public. However, the following video is unlike any we have ever seen, as the person flexing their rights is a 12-year-old girl, who runs her own news company out of Arizona.

Hilde Kate Lysiak is a reporter/publisher of the website Orange Street News—which she founded. Since she was in the single digits of age, this little journalist has been an inspiration to those who value dedication to the free press becoming world famous for being the first to report on a grisly murder in her town—at age 9.

Because Lysiak has been in the business for so long, even though she is only 12, she knows the ropes when it comes to filming in public. So, when she was approached and threatened with arrest for filming, she was undeterred.

On Monday, Lysiak was investigating a tip for a story in Patagonia when she was threatened with arrest.

The OSN was biking down Roadrunner Lane investigating the tip at about 1:30 pm on February 18th when the reporter was stopped by Patagonia Marshal Joseph Patterson and asked for identification.

The Orange Street News identified herself as a member of the media, including name and phone number.

Despite providing this information to the officer, Patterson continued to press the girl.

"I don't want to hear about any of that freedom of the press stuff," said Patterson. "I'm going to have you arrested and thrown in juvey. "

According to Lysiak, Patterson had passed several other people on the street and didn't stop any of them. He appeared to be targeting the girl specifically because of what she was doing—reporting.

"I can have you arrested, do you understand?" the Marshal said.

When Lysiak asked the officer what charges she would be arrested on, he replied, for "disobeying my command." He then quickly changed his tone and said it was for riding on the wrong side of the road.

"I'm worried about your safety, the area you were in we were dealing with a mountain lion," said Patterson after threatening to have this little girl thrown in a cage for daring to practice her First Amendment rights.

After briefly pretending to care about her safety, Patterson once again resorted back to threatening Lysiak.

Ah, but this officer clearly hasn't studied the law at all as multiple courts at all levels—state and federal—including the Supreme Court, have ruled that citizens can film cops in public.

As TFTP has reported, it has been clearly established that all Americans have the right to record the police. For an officer of the law to remain willingly ignorant of this precedent is at best, dereliction of duty, and at worst, unlawful deprivation of rights. Either way, this cop was in the wrong.