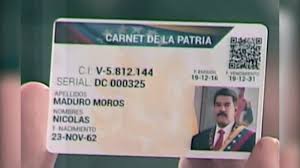 If you want a totalitarian regime, you have to take extra steps to control the populace. And that's just what Venezuela has done with the advent of a biometric ID called Carnet, loosely translated as The Fatherland Card. Carnet is closely related to the dystopian Chinese social credit program and in fact, uses much of the same technology to track and spy on citizens.

And it's been in the works for a long time.

Their mission, according to a member of the Venezuela delegation, was to learn the workings of China's national identity card program…

…Once in Shenzhen, though, the Venezuelans realized a card could do far more than just identify the recipient.

There, at the headquarters of Chinese telecom giant ZTE Corp, they learned how China, using smart cards, was developing a system that would help Beijing track social, political, and economic behavior.

Using vast databases to store information gathered with the card's use, a government could monitor everything from a citizen's personal finances to medical history and voting activity…

…10 years after the Shenzhen trip, Venezuela is rolling out a new, smart-card ID known as the "carnet de la patria," or "fatherland card."

…And ZTE, whose role in the fatherland project is detailed here for the first time, is at the heart of the program.

As part of a $70 million government effort to bolster "national security," Venezuela last year hired ZTE to build a fatherland database and create a mobile payment system for use with the card, according to contracts reviewed by Reuters.

A team of ZTE employees is now embedded in a special unit within Cantv, the Venezuelan state telecommunications company that manages the database, according to four current and former Cantv employees. (source)

Without this card, just to name a few things, Venezuelans cannot access services like healthcare, they can't purchase food, and they are unable to vote in elections.

What exactly is the Carnet?

Although the media has only been talking about it being launched in 2017, there have been predecessors to the current ID, which you'll hear about in a moment.

Although it existed before, it was rolled out with fanfare in 2017.