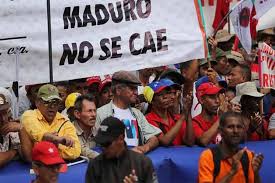 The diplomat spoke at the assembly of MIU explaining that the process of interference of the U.S. government with Venezuela, Nicaragua and Cuba attwemptesd to erase the revolutionary forces and deny the Venezuelan Constitution.

The supposed humanitarian aid, he said, is the prelude of an intervention that will bring misery to the people, there are examples like Libya, Syria and Irak.

For his part, the Secretary General of MIU, Miguel Mejia, expressed that 'imperial pretensions failed' and considered the provocation as a media circus of bad taste.

He also said it is an imperial maneuver to keep confusing the world and keep terrorizing a people whose only crime has been to make its own road of Independence and justice.

The assembly approved a declaration of MIU in which, among other aspects, rejects the blockade on Cuba, renders tribute to the historic leader of the Cuban Revolution, Fidel Castro and hails the referendum being voted today in Cuba on the new Constitution of the Republic.

The document also expresses solidarity with Nicaragua, its government and people and greeted the call for a dialogue for peace they try to accomplish.

It finally reiterated total support to Venezuela, to Nicolas Maduro as only and legitimate president, recalled the figure of Hugo Chavez and called on all the political and social forces of the region to unite in order to stop the interventionist offensive of the United States.