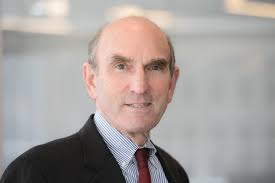 Inadvertently, Ilhan Omar revealed that Trump may have picked the right man to implement his policy in Venezuela.

n a testy exchange with Elliott Abrams on Wednesday, Representative Ilhan Omar resurrected the memory of El Salvador's El Mozote massacre, one of the worst mass killings in modern Latin American history. Omar, a Democrat from Minnesota, was all of two months old when the December 1981 massacre took place. Abrams, President Donald Trump's new special envoy for Venezuela, was a senior State Department official in the Reagan administration, which was sending military and economic aid into El Salvador to defeat a leftist insurgency and stop what it saw as a wave of communism approaching the United States.

What happened in 1981? And what did Abrams have to do with it?

More than 900 peasants were murdered in and around several villages in the eastern province of Morazán. Most were old men, women, and children. At the Roman Catholic church in El Mozote, soldiers separated men from their families, took them away, and shot them. They herded mothers and children into the convent. Putting their American-supplied M-16 rifles on automatic, the soldiers opened fire. Then they burned the convent. Some 140 children were killed, including toddlers. Average age: 6.

Omar's questioning of Abrams was not artful, and Abrams wasn't unreasonable in viewing it as a personal attack. But she was right to suggest that he had sought to diminish or even cover up the massacre by calling it communist propaganda. Nor was she wrong to question whether Abrams was ethically qualified to assume a high government position, with the mission to oust the Venezuelan dictatorship and promote democracy.

In El Salvador, the Reagan administration, with Abrams as point man, routinely defended the Salvadoran government in the face of evidence that its regular army, and allied right-wing death squads, were operating with impunity, killing peasants, students, union leaders, and anyone considered anti-government or pro-guerrilla. Abrams went so far as to defend one of the death squads' most notorious leaders, Roberto D'Aubuisson, who was responsible for the murder of Archbishop Óscar Romero while he was saying Mass, in March 1980.

It was Romero's assassination that touched off a civil war in El Salvador—an alliance of the military and the oligarchs, which had ruled for decades with support from the United States, against a Marxist-inspired insurgency. Most of the support for the revolution came from El Salvador's peasants, who had little to lose in seeking to overthrow a government that had resorted to brutal repression to keep them in miserable poverty.

To drain the peasant sea in which guerrillas swam, to borrow from Mao, the Atlacatl Battalion, whose officers had recently completed counterinsurgency training in the United States, launched a "scorched earth" operation in Morazon, a mountainous region where semiliterate peasants labored on their small plots of sisal and corn.