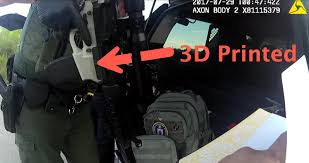 According to Cox, Eric McGinnis obtained a barrel, tactical stock, upper receiver, and a vertical grip -- and then used a 3D printer to build the gun's lower receiver, the section of the firearm which provides housing for internal components such as the hammer, bolt, action, and firing mechanism.

He then assembled the parts into a short-barrel AR-15 rifle and traveled to a nearby woodland with what federal attorneys called an extensive "hit list" of Democratic and Republican lawmakers, including their home addresses. The list was titled, "9/11/2001 list of American Terrorists."

The arrest of McGinnis occurred in 2017 after Grand Prairie Police Department in Texas heard rapid-fire shooting in a remote area of town. On Wednesday, he was sentenced to eight years in prison.

A second examination of McGinnis' cellphone and computer by US Capitol investigators suggested he was overly obsessed with James Hodgkinson, the shooter who wounded Rep. Steve Scalise at a GOP Congressional baseball practice in Virginia in 2007, the federal prosecutor revealed at sentencing Wednesday.