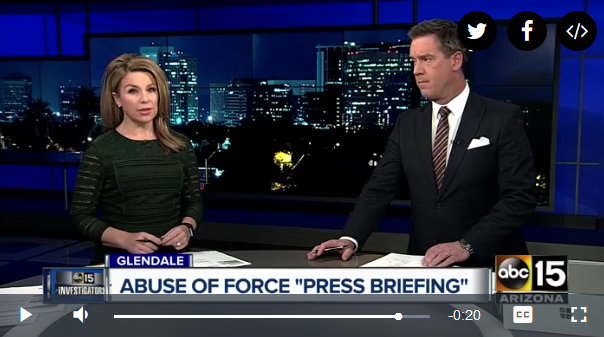 A lawsuit stemming from the July 2017 encounter alleged one Glendale officer kicked Johnny Wheatcroft in the groin during a struggle, while another officer shot him with the stun gun in the testicles.

Glendale police held a private briefing Monday to respond to the excessive force allegations after a video of the encounter surfaced on ABC15.

Officials refused to let media members bring in cameras or other recording devices, saying that they didn't want their comments to be used against them in court.

The police department has acknowledged its officers used stun guns on Wheatcroft and that an officer kicked him during a struggle.

The agency said Wheatcroft wasn't following officers' commands and that Wheatcroft's wife hit an officer in the head with a plastic bag containing full soda cans, knocking the officer to the ground.

During the briefing with reporters, spokespeople for the police department declined to answer several questions, such as whether it was within agency policy to use a stun gun on a person who was handcuffed.

Police say Wheatcroft and his family were passengers in a car that was suspected of a traffic violation.

Agency spokesman Sgt. John Roth said the kick to Wheatcroft was allowed under a policy regarding people who are resisting officers.