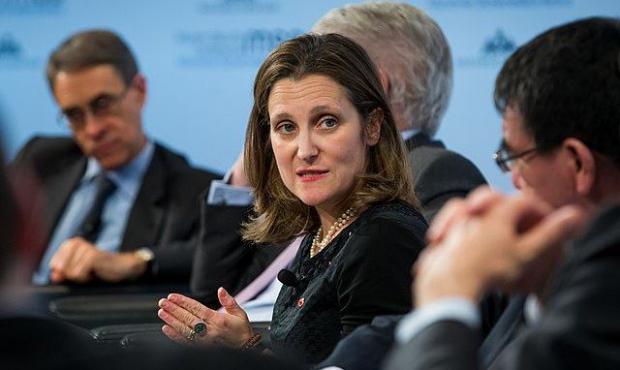 "Today, we have been joined by our Lima Group partners, from Argentina, Brazil, Chile, Colombia, Costa Rica, Guatemala, Guyana, Honduras, Panama, Paraguay, Peru, and Saint Lucia. We have also been joined in our conversations with our partners from other countries, for this Lima Group ministerial meeting. These include Ecuador, the European Union, France, Germany, the Netherlands, Portugal, Spain, the United Kingdom, and the United States."

She, along with US President Donald Trump, had, all along, been the actual leaders of this international diplomatic effort, to violate the Venezuelan Constitution blatantly, so as to perpetrate the coup in Venezuela.

Her active effort to replace Venezuela's Government began with her formation of the Lima Group, nearly two years ago.Canada's Ottawa Citizen headlined on 19 August 2017, "Choosing Danger", and their reporter Peter Hum interviewed Canada's Ambassador to Venezuela, Ben Rowswell, who was then retiring from the post.