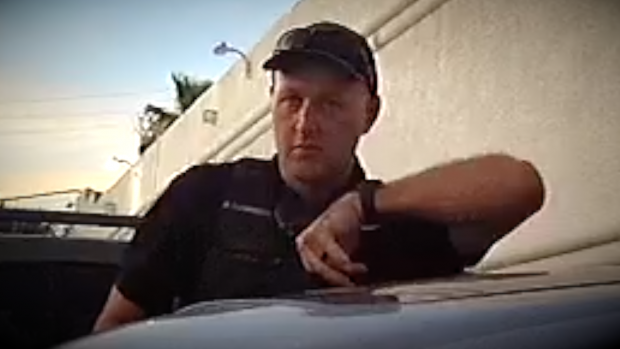 On July 27, 2017, Johnny Wheatcroft was a passenger in a silver Ford Taurus when a pair of Glendale police officers pulled in front them in a Motel 6 parking lot.

The stop was for an alleged turn signal violation.

Minutes later, Wheatcroft was handcuffed lying face down on the hot asphalt on a 108-degree day. He'd already been tased 10 times, with one officer kneeling on his back as another, Officer Matt Schneider, kicked him in the groin and pulled down his athletic shorts to tase him a final time in his testicles, according to a federal lawsuit and body camera footage obtained by ABC15.

The scene was witnessed by his 11- and 6-year-old sons.

Multiple independent law enforcement experts, who agreed to review the incident, said the officers' conduct was unlawful, potentially criminal, and one of the most cruel and troubling cases of police misconduct they've ever seen. (VIDEO EMBED BELOW)

I smell a business opportunity here. Make an agreement with certain cops who are buddies of yours, that they will take you down and beat you, but not violently enough so that you get hurt - more like a movie act. Then, when you get a couple $million settlement off the city, you all split the proceeds.

Virginia trooper is fired after telling black motorist: 'You're going to get your a** whoope