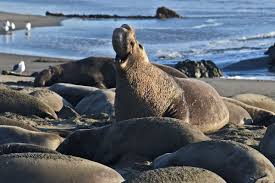 The recent US government shutdown was certainly a source of frustration for many federal workers – especially park rangers.

But for the elephant seals of Drake Beach, California, the absence of human activity became a prime opportunity to claim a new home for their nesting season.

As the number of rangers monitoring the coastline just north of San Francisco dwindled during the shutdown, the once visitor-friendly shoreline was occupied by over 100 of the formerly endangered mammals.

In an effort to protect both seals and visitors, the park service of Point Reyes national seashore has closed the beaches until early April, when it is expected for the seals to vacate.

"In January 2019, elephant seals occupied the section of Drakes Beach adjacent to the [visitor center], and, at times, the parking lot and wooden ramps leading up to the visitor center," the park service announced. "As a result, the entire Drakes Beach area south of the [highway junction] was closed to the public to better protect the elephant seals from disturbance."

In the weeks following the closure, the elephant seal population has continued to increase, with the arrival of a dozen newborn pups alongside their respective mothers. The isolation, as well as lack of disturbance from visitors, has helped to create a perfect safe haven where the female seals can nurse their young, the pups can explore, and the massive, 12-foot long males can duke it out over territorial disputes.

Since the elephant seal was almost hunted to extinction in the late 19th century, the seal's resurgence is being celebrated by conservationists.

Make Way for the Snitch State

As Trust In The Government Erodes, Many Americans Are Discovering That It Is TOO LATE...