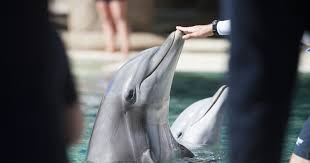 Kai, a 22-year-old dolphin, died Thursday morning after his condition began deteriorating and he had difficulty swimming, eating and breathing, according to a statement from Dolphinaris.

The dolphin had shown signs of declining health two weeks ago and was treated, according to the statement from Christian Schaeffer, general manager for Dolphinaris.

"Kai initially seemed to be responding, but his health suddenly declined (Wednesday) night," Schaeffer said in the statement.

"We made the extremely difficult decision to humanely euthanize Kai ensuring he would pass peacefully," Schaeffer's statement read.

Kai's death marks the fourth death since the facility opened in 2016, and comes just a month after Khloe, an 11-year-old Atlantic bottlenose dolphin, died on Dec. 30 after a chronic illness.

Puppies Are Born Ready to Communicate With And Understand Humans

I SWORE OFF THIS ANIMAL FOREVER... We Just Got 2