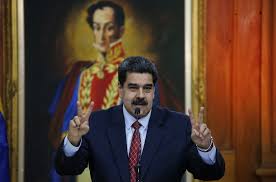 On Friday, The New York Times continued its long, predictable tradition of backing U.S. coups in Latin America by publishing an editorial praising Donald Trump's attempt to overthrow Venezuelan President Nicolas Maduro. This will be the 10th such coup the paper has backed since the creation of the CIA over 70 years ago.

A survey of The New York Times archives shows the Times editorial board has supported 10 out of 12 American-backed coups in Latin America, with two editorials—those involving the 1983 Grenada invasion and the 2009 Honduras coup—ranging from ambiguous to reluctant opposition. The survey can be viewed here. Covert involvement of the United States, by the CIA or other intelligence services, isn't mentioned in any of the Times' editorials on any of the coups. Absent an open, undeniable U.S. military invasion (as in the Dominican Republic, Panama and Grenada), things seem to happen in Latin American countries entirely on their own, with outside forces rarely, if ever, mentioned in the Times. Obviously, there are limits to what is "provable" in the immediate aftermath of such events (covert intervention is, by definition, covert), but the idea that the U.S. or other imperial actors could have stirred the pot, funded a junta or run weapons in any of the conflicts under the table is never entertained.

More often than not, what one is left with, reading Times editorials on these coups, are racist, paternalistic "cycle of violence" cliches. Sigh, it's just the way of things Over There. When reading these quotes, keep in mind the CIA supplied and funded the groups that ultimately killed these leaders:

Brazil 1964: "They have, throughout their history, suffered from a lack of first class rulers."

Chile 1973: "No Chilean party or faction can escape some responsibility for the disaster, but a heavy share must be assigned to the unfortunate Dr. Allende himself."

Argentina 1976: "It was typical of the cynicism with which many Argentines view their country's politics that most people in Buenos Aires seemed more interested in a soccer telecast Tuesday night than in the ouster of President Isabel Martinez de Perlin by the armed forces. The script was familiar for this long?anticipated coup."

US Proxy Ukraine Sending Terrorists and Weapons to Belarus

Imperial Overstretch Arrives: Americans Do Not Need the American Empire

Media in Cahoots with US Coup Plot in Belarus

EU in Cahoots with US Coup Attempt in Belarus

Russia Slams EU Collusion with US Coup Plot in Belarus

Struggle to Defeat the US-Orchestrated Coup Plot in Belarus

Media Support for US Color Revolution Attempt in Belarus

The Struggle for Belarus' Soul