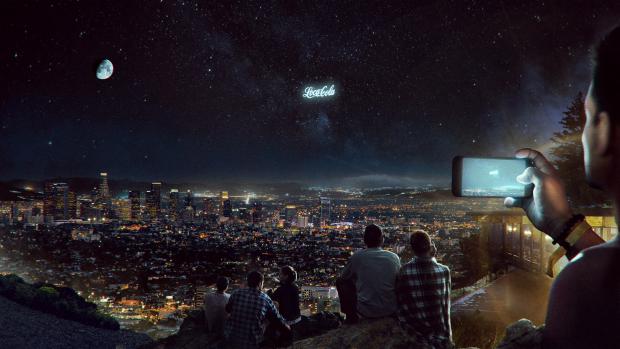 If it sometimes feels as if the world is awash in advertisements, just wait. A Russian startup just revealed plans to use swarms of tiny, light-reflecting satellites to create sprawling billboards in space.

The first of StartRocket's space-based ads, shown in a new concept video released by the company last week, could go up by 2021. The ads — a bit like skytyping, only in low-Earth orbit rather than in the atmosphere — would be visible only at night but could be seen from just about anywhere on Earth.

The ads would be created by an array of tiny satellites, each equipped with a reflective sail about 30 feet in diameter. As these "cubesats" orbit at an altitude of about 280 miles, sunlight would reflect off the sails to form luminous words or logos visible from the ground below. StartRocket's space-based ads would be visible only at night but could be seen from just about anywhere on Earth.StartRocket

The company has a prototype cubesat already, and initial tests of space-based advertising could begin early next year, StartRocket CEO Vlad Sitnikov said in an email to NBC News MACH. The company hasn't revealed details about which rocket would deliver the satellites into orbit or how much it would charge clients to advertise.

Sitnikov said the company's plan for space-based advertising was inspired by the "disco ball" satellite launched into orbit in January 2018 by the Huntington Beach, California-based firm Rocket Lab. The "Humanity Star" satellite, put into space as an orbiting art project, circled the planet for two months before burning up in the atmosphere as it fell back toward Earth.

Sitnikov said the boldness of the Humanity Star project led him to wonder: "What if we will invent a new media, the first media in orbit?"