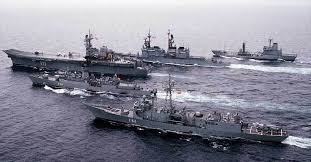 Newsflash: Venezuela is a mortal enemy of the United States. In their present status they rival the threat posed by Cuba in the 1960's. America deserves Venezuela's wrath. Thanks to the Deep State and former Secretary of State, Hillary Clinton, America economically isolated Venezuela from the West. The Federal Reserve did not want the economic competition and political power that would come from Venezuela's vast oil supplies as well as their cheap labor market. Subsequently, Hillary used a form of dollar diplomacy to get Venezuela isolated from her major trading partners. Vast and deadly food shortages resulted. This was an act of war committed by the Obama administration and its minion, Secretary of State Hillary Clinton. As a result, Venezuela has struck back.

As detailed in a recent publication, The Common Sense Show identified Venezuela's instrument of aggression, the s0-called Axis of Unity.

As previously identified, the members and ancillary members of this unholy confederation are as follows:

There are two major threats to the United States stemming from Venezuela's role in the Axis of Unity: (1) Venezuela's ally, China, has positioned a vast naval armada off the east coast of Venezuela. This is to protect Venezuela from the certain invasion that is coming from the United States for its role in the illegal immigration invasion. Former head of the CIA and present Secretary of State, Mike Pompeo, has strongly indicated we are going into Venezuela; and, (2)  Venezuela is at the vanguard of the mass caravans of illegal immigrants coming out of Central America along with the financial support of George Soros and the UN Migration Council.

This article will expose and explore both threats posed by Venezuela and her new found allies in the Axis of Unity.

Threat #1: The Planned Collapse of Mexico

In a very lengthy phone conversation I had with the President of the New California Movement, Paul Preston, I learned that the caravans are embedded with terrorist operatives placed in the caravans by Axis and their mission is to take down the grid of Mexico. I did not immediately publish this information because I wanted to get a second confirmation of this fact. I received a second, third and fourth confirmation of this. The plan is to so disrupt Mexico by taking down the grid, that millions of Mexicans will stream to the north and illegally and desperately attempt to enter the United States. This strategy is a matter of convenience and practicality. The organizers of the caravans can place hundreds of thousands of desperate people on the US-Mexico border. However, taking down the grid could put millions of Mexicans on the border.

Perhaps not so coincidentally, the US grid was hacked into on Thursday, January 17th. Yet, no detectable damage was done. Was this a warning directed at Trump?

Threat #2: The Chinese Have Emerged as the Military Protector of Venezuela

Mike Pompeo's comments about going into Venezuela are clearly motivated by Venezuela's actions. However, China has other ideas.

In September of 2018 in a story that caught my eye, I read in multiple sources that the Chinese were engaged in sending, by ship, humanitarian aid to Venezuela. This caught my attention because when has the Chinese communist government ever helped anyone but themselves? The only reason that the Chinese would have help anyone is because they have something to gain. On September 25th, I noted these anomalies in the following short video.