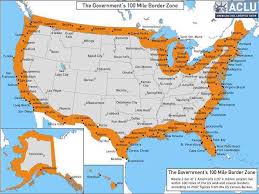 How far would you really go to secure the nation's borders against illegal aliens?

Would you give the government limitless amounts of money to fight yet another endless war? Surround the entire country with concrete walls and barbed wire? Empower border police to do whatever it takes to crack down on illegal immigrants, even if it means violating their human rights? Hold your nose and tolerate all manner of abuses in name of national security?

Would you allow government agents to trample on the rights of anyone who gets in their way, including legal citizens? Relinquish some of your freedoms in exchange for the elusive promise of non-porous borders? Submit to a national ID card that allows the government to target individuals and groups as it chooses in order to identify those who do not "belong"? Turn a blind eye to private prisons and detainment camps that profit off the forced labor of its detainees?

Would you turn your backs on every constitutional principle for which our founders fought and died in exchange for empty campaign promises of elusive safety by fast-talking politicians?

This is the devil's bargain that the U.S. government demands of its people.

These devilish deals have been foisted upon "we the people" before.

Every decade or so, the government makes the case for expanding its wartime powers and curtailing the citizenry's freedom—in the war on terrorism, war on drugs, war on communism, war on foreigners, war on extremism, war on dissidents, war on peace activists, war on anti-government speech, etc.—all for the sake of national security, of course, and as expected, the American people fall in line.

This time around, the government wants us to buy into the fiction that this war on illegal aliens is so necessary for national security that we should be grateful when roving bands of border patrol agents, flexing their muscles far beyond the nation's borders, exercise their right to disregard the Constitution at every turn.

Except these border patrol cops aren't just disregarding the Constitution.

They're trampling all over the Constitution, especially the Fourth Amendment, which prohibits the government from carrying out egregious warrantless searches and seizures without probable cause.

As part of the government's so-called crackdown on illegal immigration, drugs and trafficking, its border patrol cops are expanding their reach, roaming further afield and subjecting greater numbers of Americans to warrantless searches, ID checkpoints, transportation checks, and even surveillance on private property far beyond the boundaries of the borderlands.

That so-called border, once a thin borderline, is now an ever-thickening band spreading deeper and deeper inside the country.

As journalist Todd Miller explains, that expanding border region now extends "100 miles inland around the United States—along the 2,000-mile southern border, the 4,000-mile northern border and both coasts... This 'border' region now covers places where two-thirds of the US population (197.4 million people) live… The 'border' has by now devoured the full states of Maine and Florida and much of Michigan."