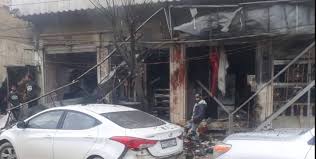 update: A US official speaking to Reuters has confirmed 4 US soldiers killed in Wednesday's suicide bomb attack on a Manbij restaurant in northern Syria:

Four U.S. soldiers were killed and three wounded in a blast on Wednesday in the Syrian town of Manbij, a U.S. official said.

A news site affiliated with Islamic State earlier issued a statement saying an attacker with a suicide vest had targeted a patrol of the U.S.-led coalition operating in Manbij.

Previously, a source told Turkey's TRT World, "The explosion took place inside a restaurant where US, French troops, and YPG militants were meeting."

However, US defense officials have not immediately confirmed details, only saying in the aftermath that US coalition forces had been "conducting a routine patrol" in the area.

White House correspondents have reported President Trump has been briefed on the matter.

In an apparent terror attack targeting a US-led coalition patrol, a blast has rocked a restaurant in the northern Syrian city of Manbij on Wednesday. Conflicting reports say there are casualties among American soldiers as well as potentially a delegation of Syrian Kurdish leaders, as the bombing took place the moment a US military patrol passed by, and there may have even been coalition personnel inside the restaurant.