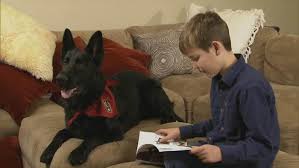 This young boy was recovering from cancer when he told news reporters how much he missed his dog back home – and without hesitation, a total stranger volunteered to reunite them.

8-year-old Perryn Miller and his parents had been visiting family members in Utah for Christmas when the youngster started having headaches. His parents brought him to the emergency room only to hear that their son had a brain tumor as a result of stage 4 glioblastoma multiforme, a rare and aggressive form of brain cancer.

The very next day, Perryn underwent a 7-hour surgery to have the tumor removed. Though the operation was successful, he now faces several months of chemotherapy and radiation – but his parents are unsure of where he will be receiving the treatment.

The Millers are originally from Wilmington, North Carolina. Since their home was destroyed by Hurricane Florence last year, they have been living with local family members while they rebuild.

So while the Millers are staying in Utah for Perryn's recovery, the boy expressed how much he missed his dog: an 8-month-old German shepherd named Frank.

Why G Edward Griffin has a positive outlook on the future