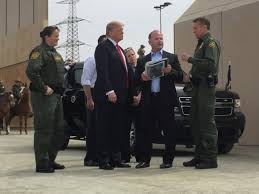 The White House announced today that President Trump will visit the U.S.-Mexico border on Thursday as he continues to push for funding for the border wall.

White House Press Secretary Sarah Sanders wrote on Twitter, "President @realDonaldTrump will travel to the Southern border on Thursday to meet with those on the front lines of the national security and humanitarian crisis. More details will be announced soon."

The president's visit will come on what will likely be the 20th day of the partial government shutdown. Numerous government agencies first ran out of funding on Dec. 22, as Democrats vowed to block Trump's requested $5.7 billion to build the border wall and Trump insisted on the money. Last week, House Democrats proposed a bill to fund the Department of Homeland Security, which oversees construction of the wall, at current levels through Feb. 8, with $1.3 billion for border security—a figure far less than Trump requested. Senate Republicans so far have not taken it up.

A recent Associated Press-NORC Center for Public Affairs Research poll found that immigration is a top issue for Americans in 2019.

In an open-ended question, forty nine percent of respondents named immigration as one of the top five problems they'd like the government to handle in 2019. That is up from 27 percent who mentioned immigration in 2017.

Last week, President Trump joined Border Patrol officials at a White House press conference where they expressed their support for a wall at the southern border.

President of the National Border Patrol Council, Brandon Judd, told journalists, "I have been a border patrol agent for 21 years. I can personally tell you from the work that I've done on the southwest border that physical barriers, that walls actually work. You hear a lot of talk that there are experts that say that walls don't work. I promise you that if you interview border patrol agents they will tell you that walls work."

He continued, "I worked in Naco, Arizona for ten years. We didn't have physical barriers in Naco and illegal immigration and drug smuggling was absolutely out of control. We built those walls, those physical barriers and illegal immigration dropped exponentially. Anywhere that you look where we have built walls, they have worked. They have been an absolute necessity for Border Patrol agents in securing the border."