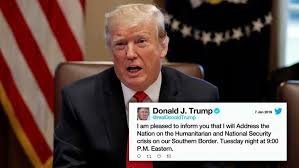 President Trump will address the nation tonight in a prime-time speech on the U.S. border and national security.

"I am pleased to inform you that I will Address the Nation on the Humanitarian and National Security crisis on our Southern Border. Tuesday night at 9:00 P.M. Eastern," the president wrote on Twitter yesterday.

Initially, there was some speculation as to whether or not networks would air the speech, however, it was announced last night that ABC, NBC, CBS, PBS and Fox broadcast network will all air the address to the nation, as well as Fox News, CNN and MSNBC.

"Now that the television networks have decided to air the President's address, which if his past statements are any indication will be full of malice and misinformation, Democrats must immediately be given equal airtime," they stated in a joint press release.