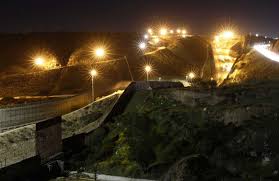 WASHINGTON (AP) — President Donald Trump will argue to the nation Tuesday night that a "crisis" at the U.S.-Mexico border requires the long and invulnerable wall he's demanding before ending a partial government shutdown that has hundreds of thousands of federal workers fearing missed paychecks on Friday.

Trump's first Oval Office speech will be followed by a Thursday visit to the southern border to highlight his demand for a barrier. White House press secretary Sarah Huckabee Sanders tweeted that he will "meet with those on the front lines of the national security and humanitarian crisis."

The administration is also at least talking about the idea of declaring a national emergency to allow Trump to move forward on the wall without Congress approving the $5.6 billion he wants. Vice President Mike Pence said again Tuesday that the idea of making such a declaration remains on the table.

Such a move would certainly draw legal challenges, and Trump — who told lawmakers he would be willing to keep the government closed for months or even years — has said he would like to continue negotiations for now.

"The passion you hear from President Trump, his determination to take this case to the American people, as he will tonight in his national broadcast from the Oval Office, comes from this president's deep desire to do his job to protect the American people," Pence said Tuesday on ABC's "Good Morning America."

"We're going to continue to carry that case forward until the Democrats in Congress come to the table and start negotiating, not just to end the government shutdown but to address what is an undeniable crisis at our southern border," added Pence who also lobbied for Trump during appearances on CBS and NBC.

Pelosi and Schumer called for equal time to respond to Trump.

"Now that the television networks have decided to air the President's address, which if his past statements are any indication will be full of malice and misinformation, Democrats must immediately be given equal airtime," they said in a joint statement Monday night.